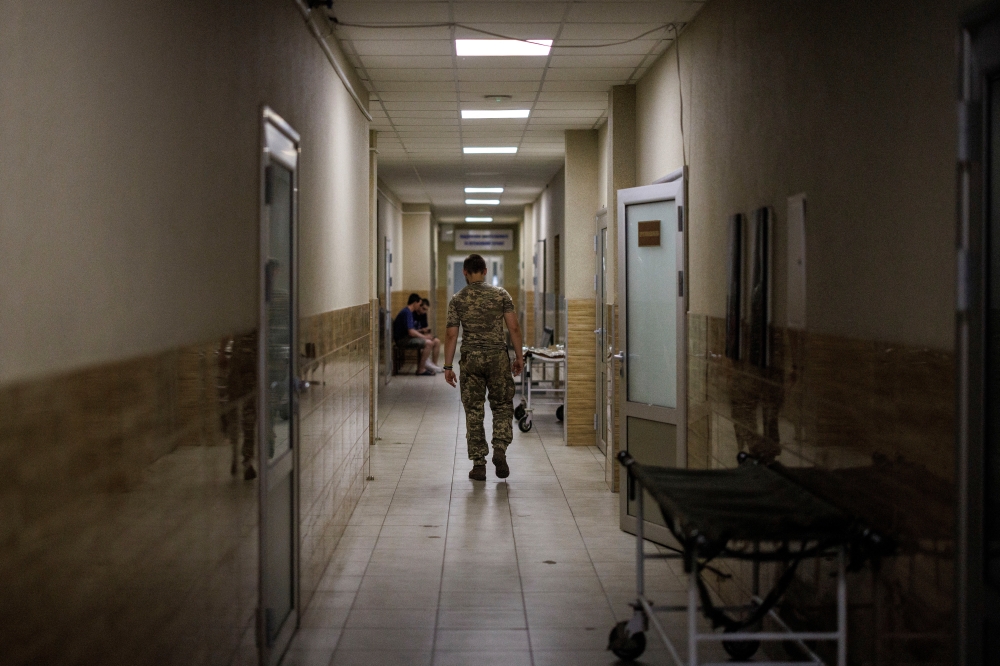 Soldiers assisting an emergency ward make their way through the corridors of a military hospital in the Donetsk region of Ukraine on August 9, 2022, as the Russian offensive against Ukraine continues. REUTERS/Alkis Konstantinidis

DONETSK REGION, UKRAINE: Andriy, a doctor in the Donetsk region of Ukraine, has little time to rest while working in a military hospital near the front lines of the war with Russia.

Ambulances travel to and from hospitals carrying soldiers wounded in the fighting that has engulfed the town of Donetsk in the Ukrainian Territory.

Andrii, who asks for only his first name, rushes down narrow corridors to meet patients brought in by ambulance and to assess and treat recently arrived patients.

As soon as you record the time of death of one soldier, examine another soldier on a stretcher.

He cuts off the injured man’s pants and tells the nurse to prepare an IV.

“Does your stomach hurt?” he asks the man, taking notes.

Andrii, 47, is from Kyiv and worked there until Russia invaded Ukraine in February. Treating young soldiers seemed the most natural thing to do in a war situation, he says.

“I’m just doing my job. We’re all doing what we need to do. We’re just doing our duty,” he says.

“The only thing that matters is that there are people doing this work, at least to some extent. I’m not saying I’m doing something ‘extra.’ Everyone just does their job and all of this comes together. Creates a certain teamwork spirit. ”

how much work does he do? It depends on the war, he says.

Russian forces initially planned to invade the capital Kyiv, but changed their strategy after Ukrainian resistance.

Calling its actions in Ukraine a “special military operation,” the Kremlin said it would focus on securing the entire Donbas region in eastern Ukraine, partly occupied by Russian forces and their proxies in 2014.

Russian forces occupied almost all of the Luhansk region in fighting by June, killing thousands on both sides.

Andrii and his colleagues treat the most debilitating injuries inflicted on Ukrainian soldiers. They theoretically he works a 12-hour shift, but often stays longer if there are more urgent cases.

“The most difficult moments are psychological,” says Mykhailo, director of the hospital’s surgical department.

“A boy of 20 or 22, when a young boy is seriously injured. When he loses a limb or sight, when he becomes disabled.”

Mykhailo started a fitness club with her colleagues to deal with stress.

But tension is everywhere.

“Grenades may be hidden in the most unexpected places,” says a poster on a hospital corridor wall.

Still, the medical team continues to work to ensure that ambulances continue to arrive and patients are treated quickly.

A nurse started humming to cheer up one of the wounded, trying to lighten the mood.

“You are a fine young man,” she says.

Lufthansa cancels more than 1,000 flights in Frankfurt, Munich during a strike

Two gun crimes on weekends in the East End