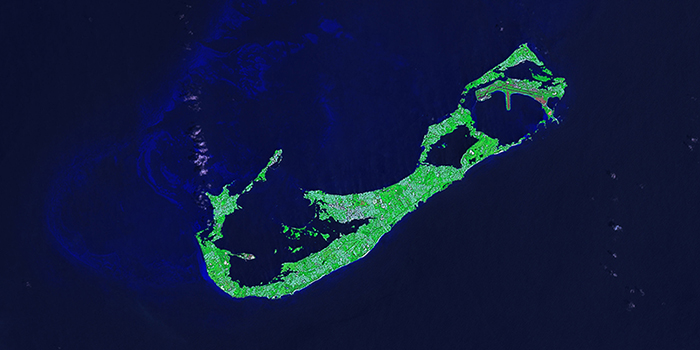 If you’ve ever wondered what Bermuda looked like from space 23 years ago, the image below will answer your question. [NASA] This image of Bermuda, taken by the Landsat 7 satellite, dates back to August 14, 1999.

NASA’s website describes the image as follows: The islands are a combination of volcanic activity, marine life and weather. The islands once had an intimidating reputation, perhaps due to noisy local birds and frequent storms, but are now popular tourist attractions.

“NASA’s Landsat 7 satellite captured this image of Bermuda on August 14, 1999. The sandy beach forms a bright white band along the southeastern tip of the island. The rest of the land is Bright green from vegetation and dotted with a dense white grid created by human development, the runway that forms Bermuda International Airport covers one of the large islands at the northern end of the archipelago’s triangle. A coral reef in the north of the island creates a blue arch on the water surface.

“Islands and coral reefs form the rim of a circular volcanic caldera. Volcanoes originally formed along the same fault line that created the Mid-Atlantic Ridge.

“The same movement of the tectonic plates slowly pulling Europe and America apart is pushing volcanoes that formed along the fault away from the ridge. Bermuda was pushed westward and is now about 1,030 km away. [640 miles] East of Cape Hatteras, North Carolina.

“After the volcanic ridge formed, calcite-secreting marine life colonized it, turning the ridge into a coral reef. covered with a limestone cap.

“When the sea level fell in the Pleistocene, [the Ice Age], limestone caps jutted above the water, turning the limestone into sand. The wind blew the sand into the dunes, which eventually hardened into sandstone. The islands formed in this way are called atolls, and while atolls are not uncommon in the Pacific Ocean, Bermuda is the only atoll in the Atlantic Ocean. ”

Wednesday wallpaper: sunrise at the lighthouse