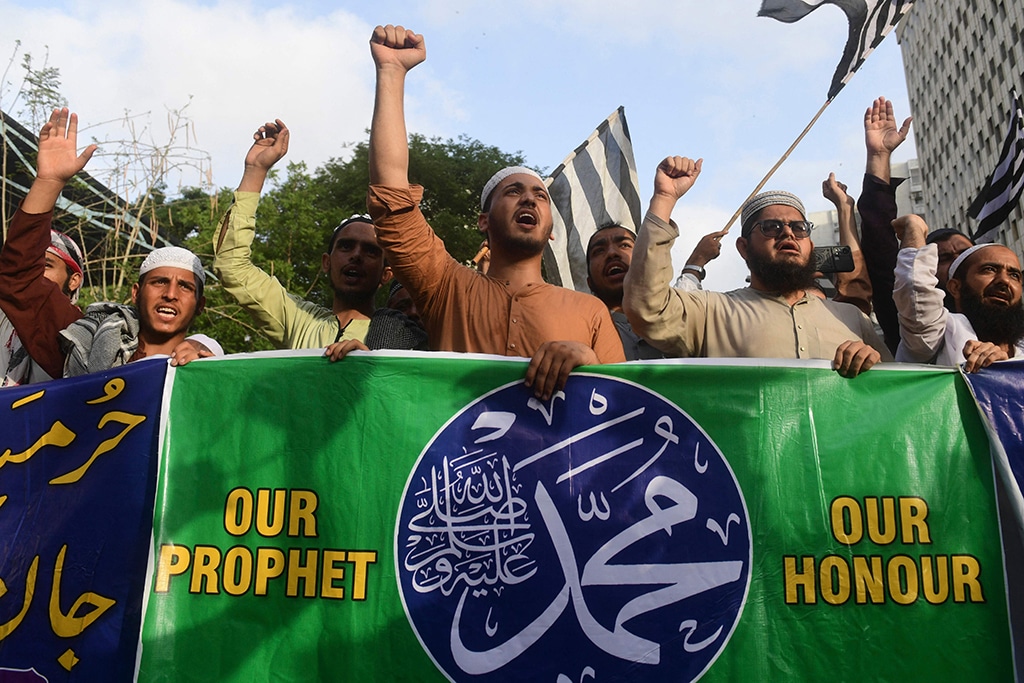 Kuwait: Middle Eastern anger spread on Monday in comments by Indian ruling party officials on the Prophet Muhammad (PBUH), various countries summoning New Delhi envoys, and Kuwaiti supermarkets removing Indian products. The United Arab Emirates has become the latest country to blame for its remarks, stating that it “contrary to moral and humanitarian values ​​and principles.”

The United Arab Emirates’ Ministry of Foreign Affairs emphasized that “we need to respect religious symbols and counter hate speech,” the state news agency WAM reported. Influential universities in Saudi Arabia, Qatar and other regions, and Cairo have blamed comments by a spokeswoman for India’s Prime Minister Narendra Modi’s party.

In Kuwait, supermarket workers piled up Indian tea and other products in trolleys in protest of comments accused of “Islamophobia.” At the Ardiya Co-Operative Society, rice bags and shelves of spices and peppers were covered with plastic sheets. “We have removed the Indian product,” read the Arabic sign. “As Kuwaiti Muslims, we do not accept insulting the Prophet (PBUH),” store CEO Nacelle Almtairi told AFP. A store official said a boycott of the entire cooperative was being considered.

Comments by spokeswoman Nupur Sharma of the Bharatiya Janata Party caused anger among Muslims. Sharma’s remarks at a television debate last week blamed a clash in the Indian state and urged her to be arrested. Anger spread abroad to Islamic countries about her remarks.

The Modi Party, which has been frequently criticized by the Islamic minority, stopped Sharma on Sunday for expressing “a view contrary to the party’s position” and said it “respects all religions.” Sharma said on Twitter that her comments were in response to an “insult” against the Hindu deity Shiva. “If my words hurt someone’s discomfort or religious feelings, I will unconditionally withdraw my remarks here,” she said.

Al-Azhar University, one of the most important institutions of Islam, said the comment was “real terrorism” and “could put the whole world in a deadly crisis and war.” The Muslim World League, based in Saudi Arabia, said the statement could “fuel hatred,” and Saudi Arabia’s Grand Mosque Governor and Prophet’s Mosque called them “evil acts.”

In 2020, anger continues throughout the Islamic world after French President Emmanuel Macron defends the right to a satirical magazine to publish a portrait of the Prophet Muhammad (PBUH). French teacher Samuel Paty was decapitated by Chechen refugees in October 2020 after showing a cartoon to his class in a free speech lesson. Images of the Prophet (PBUH) are strictly forbidden in Islam.

In further criticism of Indian officials, the Gulf Cooperation Council, the governing group of the six Gulf countries, “blamed, rejected and blamed” her comments. Bahrain also welcomed the BJP’s decision to suspend Sharma on the grounds of “provocation of Islamic emotions and incitement to religious hatred.” According to statistics from the Ministry of Foreign Affairs of India, the Gulf countries are the main destinations for India’s foreign workers, accounting for 8.7 million of the 13.5 million people worldwide.

According to the Minister of Trade, they are also a major importer of agricultural products from India and elsewhere, and Kuwait imports 95 percent of its food. Kuwaiti media reported that the government has called on New Delhi to exempt India from a surprising ban on wheat exports over food security and inflation concerns. – AFP