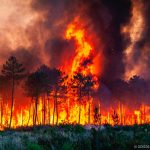 A The heat wave storms Europe moved north to Britain yesterday, authorities warned of possible record temperatures, ignited a fierce wildfire in France, and water bombers and hundreds of firefighters dried the sparks. I fought against the flames that spread in the forest.

In Spain, the country’s prime minister said “climate change will die” as two people were killed in a fire associated with global warming.

The heat wave has fueled fires in both France and Spain. It was part of a hot wall moving across Europe, and even touched on places like Britain, where authorities issued the first-ever warning of extreme heat. The country’s weather service forecasts that the highest record of 38.7 degrees Celsius set in 2019 could be shattered.

“41 people are still on the card,” said Penelope Endersby, CEO of the Met Office. “The model contains 43, but I hope it’s not that expensive.”

There, authorities began evacuating more towns, moving another 3,500 people at risk of putting themselves on a raging, flaming road that had already burned 140 square kilometers of pine forest and other vegetation. This brings about 20,000 people to be expelled from homes in the Girondins since the start of the wildfire on July 12.

Mark Vermeulen, the chief of the local fire department, describes the burning forest as a “powder barrel”, sending the embers with burning flames into the air and spreading the flames further, causing the tree trunk to shatter. I said that.

“The fire is literally exploding,” he said. “We are facing an extreme and exceptional situation.”

The Interior Ministry said it was already fighting the fire on Sunday night, and three additional planes were sent to join the other six, scooping water into tanks and running heavy clouds of smoke repeatedly.

Over 200 reinforcements join the power of 1,500 powerful firefighters fighting day and night to contain the flames of Gironde, which is approaching the waters of Arcachon and its precious vineyards, famous for its oysters and beaches. I did.

Spain, meanwhile, reported a second death in two days after fighting its own flames. The body of a 69-year-old shepherd was found yesterday in the same hills where a 62-year-old firefighter died in flames in northwestern Samora.

More than 30 forest fires broke out around Spain, forcing thousands of people to evacuate and blackening 220 square kilometers of forests and scrubs.

Spain’s Prime Minister Pedro Sanchez said yesterday during a visit to the Extremadura region where firefighters worked on three major flames, “climate change damage.” “It kills people and kills our ecosystem and biodiversity.”

Spain’s Minister for Ecological Transition Teresa Ribera described her country as “literally on fire” when attending a lecture on climate change in Berlin.

She warned that “the next few days are still horrifying prospects” — after more than 10 days of temperatures above 40 degrees Celsius, the nights only moderately cooled.

According to the Charles III Institute of Spain, which records daily temperature-related deaths, there were 237 deaths from high temperatures between July 10 and 14. This was compared to the 25 heat-related deaths last week.

Spain’s heat waves are expected to ease on Tuesday, but rest will be shorter, especially in the dry western Extremadura region, as temperatures rise again on Wednesday.

In Portugal, the much cooler weather yesterday helped the fire brigade make progress against the flames. More than 600 firefighters participated in four major fires in northern Portugal.