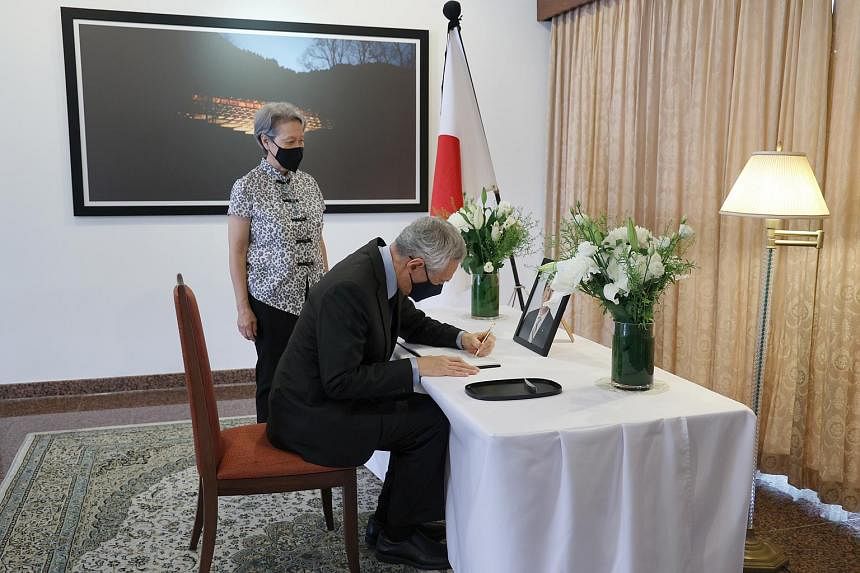 Singapore-Prime Minister Lee Hsien Loong, and a number of Singaporeans and Japanese, paid tribute to the late Shinzo Abe on Tuesday (July 12) after the assassination of the former Japanese Prime Minister last Friday.

Mr. Abe (67) was killed by a shooter in Nara prefecture while giving a campaign speech for a Japanese parliamentary election.

Lee visited Ambassador Jun Yamazaki’s mansion on Tuesday morning and signed a condolence letter in honor of him. He was accompanied by Mrs. Lee.

Lee said in a Facebook post last week that Abe was a “good friend of Singapore” and the shooting was a “very shocking and tragic event” to Mrs. Abe, his loved ones, and the Japanese. He said he expressed his condolences.

Apart from this, people steadily gathered at the Japan Creative Center (JCC), where the Japanese Embassy in Singapore opened a book of condolences to the general public from 10 am to 5 pm on Tuesday. According to JCC staff and ushers, about 400 people came to sign the book and write a message.

In the center, Japanese and Singaporeans paid homage to Mr. Abe and brought flowers with tears, which made me feel calm.

Mr. Toshinari Miyamoto, who runs a manufacturing company, expressed his condolences alone. The 59-year-old attended the same university as Mr. Abe of Seikei University and was a junior for four years.

I met Mr. Abe directly at the alumni association in 2007.

“He was an energetic and good man and our longest service leader. He did many good things for our economy, including the” Three Arrows of Abenomics “, and attention. “It deserves,” Miyamoto said, referring to the economic policies of the late leader. He focused on flexible fiscal policy, monetary expansion and structural economic reform.

OPEC+ considers cuts of up to 2 million barrels per day

Prime Minister Lee said the PAP is “making the utmost effort” to defend the...

Ukraine is suffering from a strategic city retreat