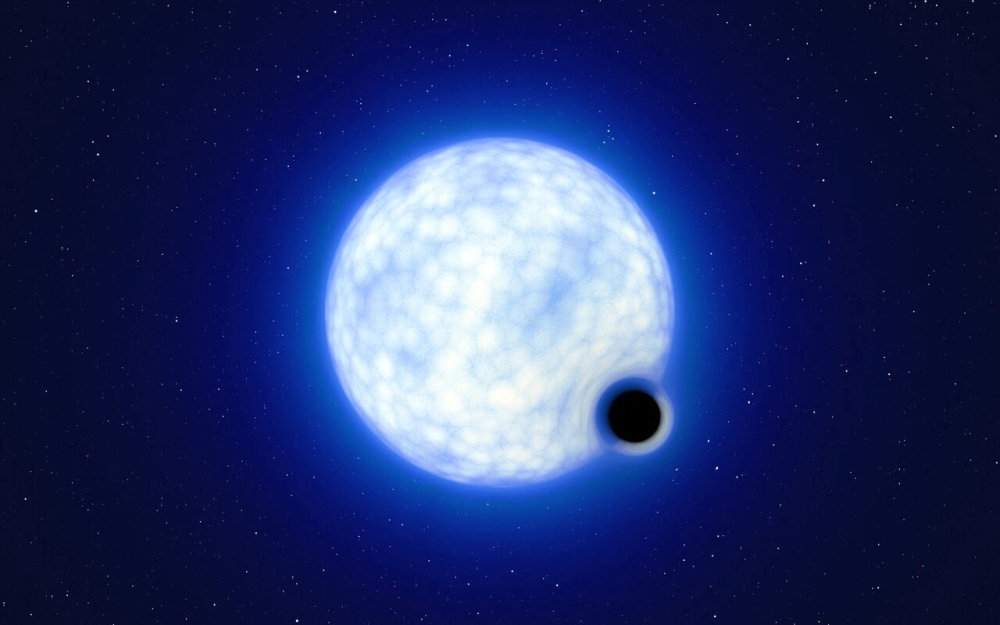 An artist’s impression of what it looks like when you look closely at the binary star system VFTS243, where a black hole and a large luminous star orbit each other. (Reuters)

Washington: Astronomers have discovered a galaxy adjacent to our Milky Way, what they call the “needle in a haystack” of the universe. This is a black hole that not only falls into a dormant state, but also appears to have been born without the explosion of a dying star.

Researchers said on Monday that this is a powerful X-ray emission that shows that it swallows nearby matter with a strong attraction, unlike all other known black holes in that it is “quiet.” An explosion of a star called a supernova that does not emit.

Black holes are very dense objects with gravity, so even light cannot escape.
It has at least nine times the mass of our Sun, is detected in the Tarantula Nebula region of the Large Magellanic Cloud, and is about 160,000 light-years away from Earth.

Light-years are the distance that light travels in a year, which is 5.9 trillion miles (9.5 trillion km).

A very bright and hot blue star, which weighs about 25 times the mass of the Sun, orbits this black hole in a stellar marriage. This so-called binary system is called VFTS243.

Researchers believe that companion stars will eventually become black holes and may merge with other stars.

Dormant black holes, which are considered to be relatively common, are difficult to detect because they have little interaction with their surroundings. Numerous previously proposed candidates have been revealed in further studies, including those by team members who discovered this.

“The challenge is to find those objects,” said Tomer Shenar, an astronomy researcher at the University of Amsterdam and the lead author of a study published in the journal Nature Astronomy. “I have identified a needle from a pile of hay.”

“This is the first object of this kind discovered after decades of searching by astronomers,” said Kareem El Budley of the Harvard & Smithsonian Astrophysics Center, an astronomer and co-author of the study. Says.

Researchers used six years of observations from a Chile-based ultra-large telescope at the European Southern Observatory.

There are various categories of black holes. The smallest, like the newly discovered ones, are the so-called stellar black holes formed by the collapse of giant individual stars at the end of their life cycle. There are also intermediate-mass black holes and huge supermassive black holes in the center of most galaxies.

“Black holes are dark objects in nature. They do not emit light. Therefore, to detect black holes, we usually have one bright star around the second undetected object. Examine the binary system that you see moving. ” Julia Bodensteiner, a postdoctoral fellow at the European Southern Observatory in Munich, co-author of the study.

The collapse of a giant star into a black hole is usually thought to be associated with a powerful supernova explosion. In this case, perhaps 20 times the mass of our Sun, a star blew some of its matter into space in the suffering of its death and then collapsed into itself without exploding.

The shape of the orbit with its companions provides evidence of no explosion.

“The orbit of the system is almost perfectly circular,” Shener said.
If a supernova were to occur, the blast force would kick the newly formed black hole in random directions, creating an elliptical orbit instead of a circular orbit, Shener added.

Black holes are relentlessly greedy, wandering in gravity with all kinds of matter, including gas, dust, and stars.

“Black holes become mercilessly greedy only if there is something close enough that they can eat up. Normally, black holes detect if they are receiving material from a companion star. Is a process called accretion, “says Bowdensteiner.

“In a so-called dormant black hole system, the companions are so far apart that no material accumulates around the black hole and heats it up to emit X-rays,” Shener said. It will be swallowed by the black hole. “

Ministry of Defense, SAF needs to be vigilant in global uncertainty and strengthen defenses:...

Pornography can undermine the perspective of men and women more than...