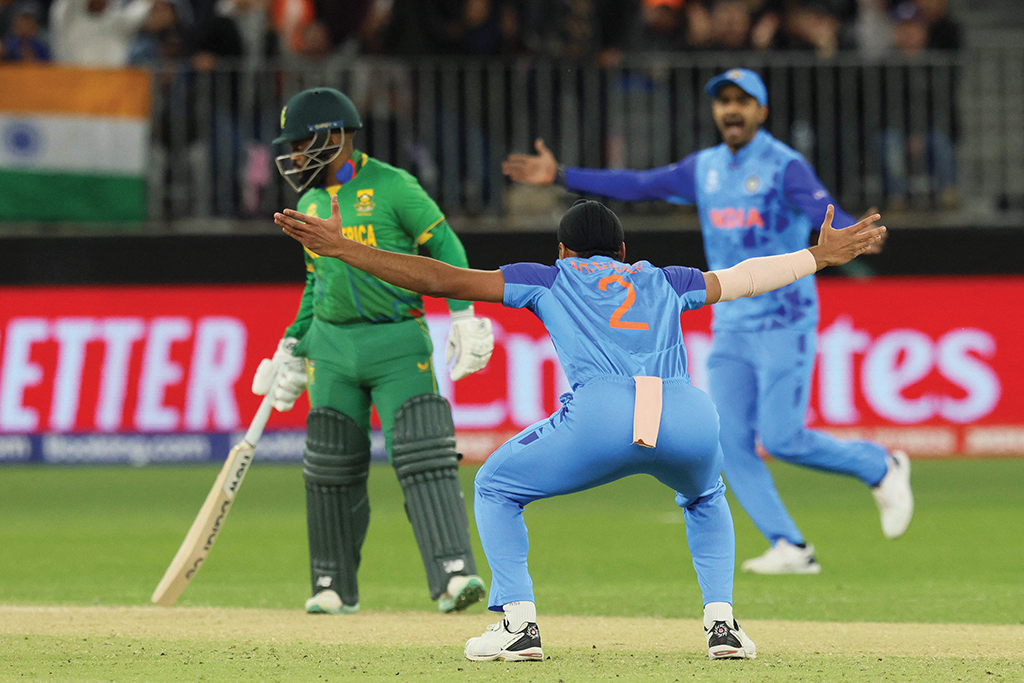 Perth: South Africa took control of Group 2 at Sunday’s T20 World Cup with a nervous victory over India after Pakistan maintained their faint semi-final hopes with their first victory of the tournament in Australia. Bangladesh put their challenge back on track, holding off Zimbabwe in a thriller to level up on points with India and exit Group 2 on balance with five teams three points clear with two games remaining.

David Miller and Aiden Markrum both took five wickets to lead South Africa to a five-wicket victory, taking 4-29 with two balls to go before the Proteas’ fast bowlers led by Lungi Guidi restricted India to under-par 133 before half-time. I spent a century -9 on a lively Perth pitch. 59 not out out Miller and Mark Lamb, who made his 52, are the top of the team, putting down a 76 as they worked hard on what appeared to be a regular chase after his orders dropped cheaply. rice field. “Fortunately, we got the momentum we needed,” said middle-order pair captain Themba Bavma.

“We entered the tournament as non-favorites, but we continue to fly under the radar,” he added, with a team undefeated in three games. “We keep improving. stepped in. First he missed Quinton De Kok and was caught by KL Rahul for 1, then on 2 balls Lily Rosuw, who had a century in the previous match against Bangladesh, wasted his lbw. did.

Markrum and Miller stabilized the inning from 24-3 and crawled up to 40-3 at halfway point. The pair then followed off-spinner Ravichandran Ashwin. Ashwin, deep in his midwicket at No. 35, Markram, was usually safe in his hand, but Bilat was left crestfallen when Kohli missed a routine chance.

India dragged the game into the final, needing six to win, but Miller finished in style with two fours to close out an unbeaten innings of 46 balls. “I thought we had something on the pitch,” said India captain Rohit Sharma. I thought we fought well until the end, but South Africa fought well. “It was a winning partnership between Miller and Mark Lamb. But it just wasn’t enough on the field.”

With 40 balls 68 after India fell to 49-5, Ngidi led an early pace onslaught after India opted to fight Yadav alone. Ngidi was well supported by his fellow fast bowler Wayne Parnell who finished 3-15 after starting the innings at T20 his rarity.

Pakistan reached their target of 92 in just 13.5 overs after beating the Netherlands by six wickets in Perth, but fell three points behind leaders South Africa, two points behind India and Bangladesh and one point behind Zimbabwe, in Group 2. It is ranked 5th in the Pakistan restricted the Netherlands to 91-9 with Mohammad Rizwan 49 to cruise to 95-4.

Pakistan need to win Thursday’s match against South Africa and the rest of their matches against Bangladesh within a week, and need other results to have a chance of securing a place in the semi-finals. “I’m very happy. We performed very well in bowling and batting,” said Pakistan captain Babal Azam. “Winning always gives you confidence.” Man of the match Shadav Khan won his 3-22 victory as Pakistan defeated the Netherlands, who missed out on the semi-finals after his three-game losing streak. “I’ve bowled with some of the players in county cricket, so I know how they play,” said Shadhav.

Early in Brisbane, Bangladesh secured a dramatic last-ball win against Zimbabwe, aided by Nazi Murshant’s maiden half-century in the opener and Tuskin Ahmed’s three wickets. Shunt’s 71 helped lead Bangladesh to his 150-to-7. Zimbabwe needed 16 off in the final over in an incredible finale. Two wickets fell and the Big 6 was hit before the team walked away thinking the game was over, but was recalled to the field.

Bangladesh believed they had won when Blessing Muzarabani, who needed five to win, stumped on the final ball. A review showed that wicketkeeper Nurul Hasan took the ball in front of the stumps, which was illegal and therefore no ball. The team had to get back on the field for the four free hits they needed to win, but Muzarabani missed again and Zimbabwe fell short 147-8. – AFP

Fear, anger, trauma: the dark side of motherhood

Dozens of children report being beaten and abused in foster villages