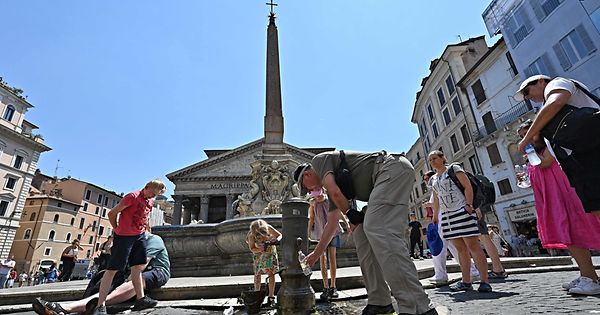 Tourists drink water from a fountain in front of the Pantheon in central Rome as a fierce heat wave struck Europe on Tuesday.

The head of the United Nations World Meteorological Organization said the heat of climate change, which covered Europe on Tuesday and pushed Britain’s temperatures to record highs, will be more frequent and intense over the next few decades.

“The climate of negative trends will continue until at least 2060,” WMO Secretary-General Petteri Taalas said in a briefing in Geneva.

“These heat waves are becoming more frequent due to climate change,” he added, blaming the amount of carbon dioxide already emitted.

“We have been doping our atmosphere by injecting more carbon dioxide,” Taalas said.

The WMO and the World Health Organization said they expect the current heat wave to raise temperatures from France to the United Kingdom to put more pressure on the health system and increase casualties. In the UK, the thermometer reached 40 degrees Celsius for the first time on Tuesday. ..

An empty deck chair is painted on dry grass at Hyde Park in London on Tuesday. This country was hit by the heat wave.

Rising temperatures are already affecting food production, causing crop damage and emergencies. According to the WHO, older people, young people and pregnant women are at greatest risk.

A man lost a lawsuit against Tan Tock Seng Hospital and...