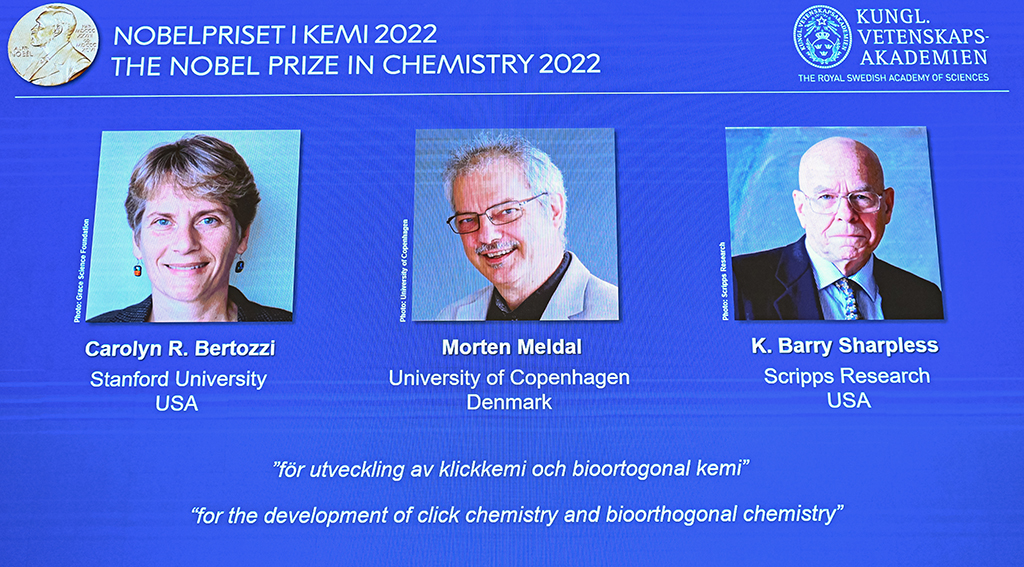 Stockholm: On Wednesday, three chemists from the United States and Denmark were awarded the Nobel Prize in Chemistry for laying the foundation for a more functional form of chemistry in which molecules are snapped together. Americans Carolyn Bertozzi and Barry Sharpless, along with Danish Morten Meldall, were honored for “developing click chemistry and bioorthogonal chemistry,” the jury said.

Bertozzi is the only woman among the seven Nobel laureates to be honored so far this year, and women have been greatly underrepresented in the history of the prize, especially in science. As an undergraduate at Harvard University, the chemist who played keyboards in the band Bored of Education with future Rage Against the Machine guitarist Tom Morello won the Nobel Prize in Chemistry among 189 winners. She is the eighth woman to receive the award.

Click chemistry “is an elegant and efficient chemical reaction that is widely used today,” the jury said in a statement. Sharpless, a professor at the Scripps Research Institute in California, “started getting the ball rolling” around 2000 and “created the concept of click chemistry,” the jury said. Stated.

Sharpless and Meldall, a professor at the University of Copenhagen, then “independently published the copper-catalyzed azide-alkyne cycloaddition, which is currently the pinnacle of click chemistry”. With the help of some copper ions, molecules can be ‘snapped’ like Lego blocks. This allows, among other things, the production of new materials. “If manufacturers add clickable azide to plastics and fibers, it’s easy to change the material at a later stage,” the Nobel Committee explained.

It is possible, he said, to click on substances that conduct electricity, trap sunlight, are antibacterial, protect against UV rays, and have other desirable properties. However, Meldal said he was “very surprised and very proud” to receive the honor. “There are so many great discoveries and developments in the world that it’s incredible to be in a situation like this,” Meldal told Swedish public radio.

A 55-year-old professor at Stanford University in the United States, Bertozzi made headlines at the time for “taking click chemistry to a new level.” “She has developed a click response that works in vivo. Her bioorthogonal response occurs without perturbing the normal chemistry of cells,” the jury said. Her research is now being used to investigate how these responses can be used to diagnose and treat cancer. I can barely breathe,” Bertozzi told reporters by phone just minutes after the announcement.

Silvia Diez-Gonzalez, a chemist who studies click chemistry at Imperial College London, welcomed the win. “I’m glad” the days when women were not allowed in chemistry labs are over, she told AFP, but “a lot of prejudices still exist”. I want to believe that it’s only a matter of time before the opportunities to demonstrate my abilities increase.

The Royal Swedish Academy of Sciences, which awards the Nobel Prize in science, has refused to introduce quotas despite a shortage of female laureates. Goran Hansson, then secretary-general of the Academy, told AFP last year that he hoped all winners would be accepted after all science awards were directed at men. The low number of female winners “reflects an unfair situation in society that still exists, especially in the last few years,” he admitted.

This year’s winners will share in the total Nobel prize of 10 million Swedish kronor (more than $910,000), which will be held in Stockholm on December 10, the anniversary of the death of scientist Alfred Nobel in 1896. Receive your award from King Carl XVI Gustaf at the award ceremony. created an award in his last will and testament. – AFP

Double child benefit payments: ‘We give it to those who need it’ – mothers...